Readers of my previous post know that one of our labs puked on three rugs this week. The alien substance smelled so bad, and permeated a 3×5 rug in my office so deeply, that I had to throw the rug away.

I rolled it up and stuck it in the trash. 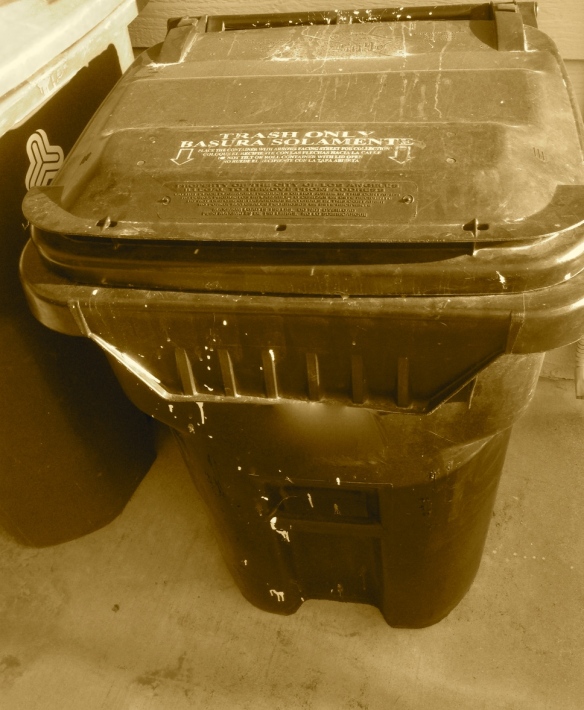 Who is that hiding in the trash can? It’s the unknown jack-in-the-box.

Now here in Los Angeles we have nighttime trash raiders. I don’t mind them as long as they’re not trying to steal identities. But my other neighbors get really upset because technically it’s illegal.

I do, however, fantasize about hiding in the trash can, then jumping out like a jack-in-the-box when one of the “Jawas” opens the lid. Nothing like a practical joke that gives a poor person a heart attack while they’re stealing plastic bottles to put food on their table to make you feel better about your life.

My wife was walking the dogs this morning when she saw a trash raider with a pick-up stop and take the rolled-up rug out of the trash and back to his truck.

Now, when I threw away the rug, it wasn’t a casual decision. If I threw away a rug each time one of our dogs barfed on it, well, we’d be rug-free and poor. But I suspect our poop eating black lab did just that – ate poop – and it created a toxic smell worthy of a government weapon.

No cleaning product was going to bring that rug back to life.

The trash raider, back at his truck, let the rug unroll. Big mistake. My wife said he immediately recoiled in horror, like he got hit by something. I’m sure after five days in the plastic bin and hot sun the stain was nice and ripe.

Even worse, she said, he must have gotten some on his hands because he was frantically trying to wipe them off on a section of the rug, while trying not to get too close to it.

Finally, he folded the rug and placed it back in our trash. Then he looked around in his truck for some water to wash his hands, but not finding any wiped his hands on his truck, got in, and drove off.

My only regret is not taking a picture of that rug for this post. Oh, well, that’s life.