16 years ago, when the Broncos beat the Packers in the Super Bowl, the stress of the game made me sick for three or four days. The following year we beat Atlanta (sorry, Larry) and won our second Super Bowl, and I was much calmer.

I packed up all of my Broncos gear until next season. I’m embarrassed to be seen in it right now.

As this year’s big game drew closer, I got nervous and a little wound up. I started using a lot of CAP LETTERS IN  MY EMAILS AND TEXT MESSAGES. I walked 81 miles on my treadmill during the week. I wore Broncos gear every day.

Then I woke up at 2 in the morning the night before the Super Bowl with pain in my right front tooth and other spots in my mouth. Nerve pain. I had to take an Ativan to go back to sleep. I feared I’d broken a tooth or had an abscess, which didn’t help with the stress.

Watching the game only made it hurt more.

Monday: The dentist asked me if I was stressed about anything lately. Yeah, the Denver Broncos, I said.

I guess he thought I was joking or this wasn’t good enough to make a diagnosis of shingles. He mentioned something about a possible virus or burn, but I didn’t connect the dots. It took my brilliant wife to do that at dinner while I was high as a Seahawks fan on half a 4-year-old Vicodin tablet.

Tuesday: Back to the dentist, but the one I see most of the time (he was off on Monday). Diagnosis: Shingles. Rx: Valtrex for 7 days, thanks to my doctor.

I thought when I had shingles on my body it was painful, but having it my mouth? Wow, torture and tears. Yes, sometimes when I eat and the food touches just the right spot, tears just fall out of my eyes, which is more rain than LA is getting these days. I should eat in the garden.

But let me make this very clear: Even the pain of shingles in my mouth is nowhere near the pain of watching the Denver Broncos tank another Super Bowl. I’d take shingles over that any day, but having both happen at the same time . . . F**k me.

I’ve savored every moment of the last two weeks, watching SportsCenter, listening to ESPN radio and eating up all the coverage of my Denver Broncos. It’s almost showtime. And best of all, WE ARE PREPARED for tomorrow’s game.

We have our Broncos shirts. I have my Broncos lounge pants and Manning 18 Jersey. Our best friends are coming over. IT’S SUPER BOWL TIME.

My wife is making deviled eggs that look like footballs. We’ll eat Papa John’s pizza in honor of Manning. She’s also making some kind of Rocky Mountain Cookie. We’ll have meat and cheese and bread. She didn’t want to buy Coors, but bought some fancy beer made by Coors. It’s all about authenticity I told her. She ignored me. I’m used to it.

My good friend and long-time Super Bowl pal is making pot roast in honor of #94, Terrance Knighton, of the Broncos. Every time he makes a big play we’re going to yell, “POT ROAST,” and eat a slice in his honor.

Here’s an assortment of the other Broncos stuff we have ready for the game. 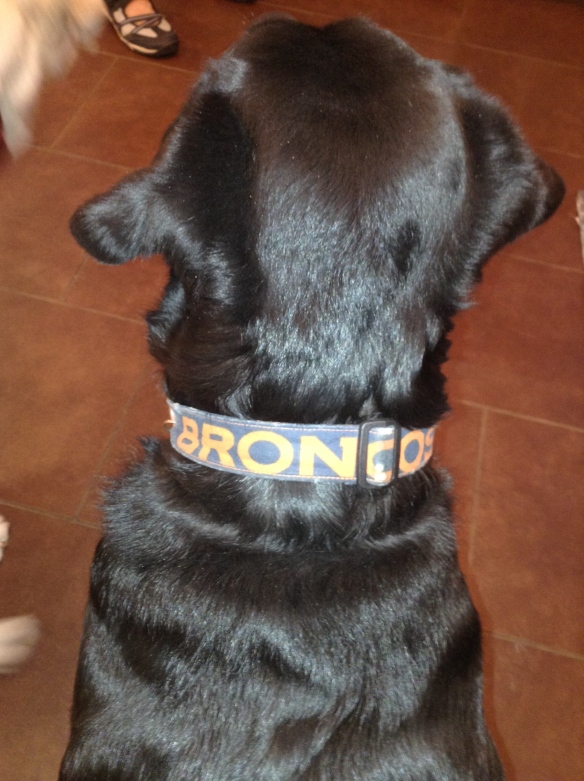 Our black lab is ready and wearing her lucky collar. 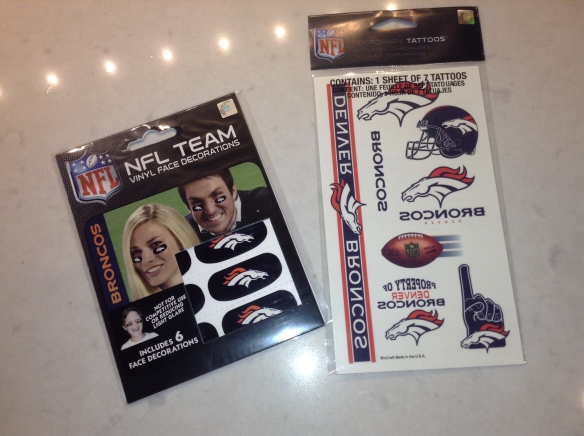 Broncos tattoos and eye patches or whatever they’re called. 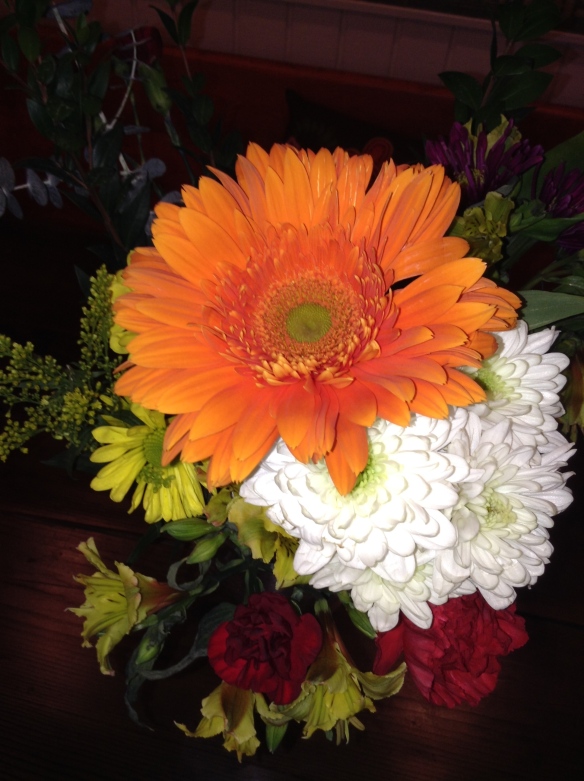 Found an orange flower at Home Depot. A Martha Stewart tip, along with how to hide your stock gains.

My wrist band and the orange hair gel I plan on using tomorrow. Yeah, you heard it here.

Plates and napkins in orange and blue. Martha Stewart’s Chow Chows would be happy to eat off of these pups, though in China they’d eat the Chow Chows off plates like these, if they watched the Super Bowl. (Where did that comment come from? There go my fans in China.)

A nice candy touch by my wife, who hates Martha Stewart. 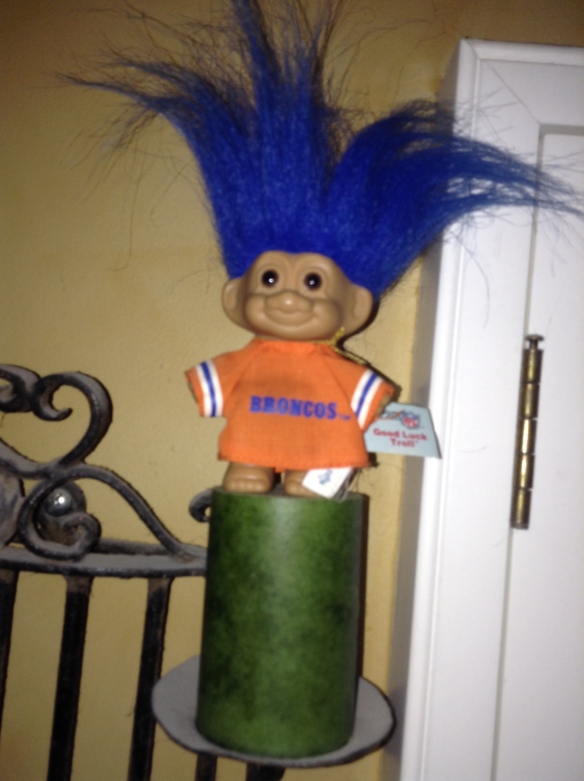 Lording over the game is my $2 Broncos troll. I discovered him waiting for me at a flea market in Long Beach and consider him my best find EVER! BTW, he was the only troll they had. Yes, the Universe works its magic in strange ways.

Little John Elway and Big John Elway will be there to watch. My friend teases me about how big of a head the real John Elway has. These two are only slightly larger, he says. But look at these, the little one’s head is as large as his body. Balloon-Head John Elway is more like it.

That’s what she called me after the Denver Broncos beat the San Diego Chargers. We were eating dinner and I was giving instructions to both her and my wife to remember exactly what they wore during the Broncos game so they could wear it again the following Sunday for the showdown with the evil New England Patriots. 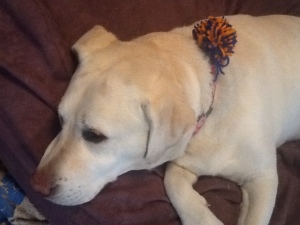 You know you have the best wife ever when she makes a Broncos pom pom for the dog without a Broncos collar. Love.

“What? You want us to wear the same thing we wore today?” she said, as if I’d just asked her to eat kale at every meal for the rest of her life, which is funny because it feels like a lifetime from the moment we ask her to eat her kale to when she actually takes a bite.

Tweener code, it’s never boring. I rue the day she calls me a cray-cray nutcracker, a term her friend invented for who knows what reason.

I need to order a tweener decoder ring on Amazon.

Regardless of my daughter’s protest, all three of us will be wearing the same clothes on Sunday at noon when the kick-off takes place.

Fortunately for the ladies of my house, they will get to wash their clothes before the game. I, being an OCD purist, will, with the exception of my Labrador boxers, be wearing the same clothes in their pristine, unwashed condition: my old Broncos t-shirt under my orange Manning jersey, Broncos lounge pants, vintage Broncos logo hat, and orange-trim running shoes, no socks.

Yes, whack-a-do sounds about right, whatever it means.

Here are a few things that get my attention and hold it.

Dogs playing. We keep our two dogs in the kitchen during the day because the puppy works for a demolition company and chews the s**t out of everything if we let her loose in the house. I often walk in and find the two of them fighting each other in a playful way that makes me wonder when blood will start spraying like a Monty Python movie.

I hang out, watch them duel, feel thankful they don’t have antlers, and forget why I walked in the kitchen.

Football games. What can I say. Even after all these years, I still like football and the Denver Broncos. And I’m sticking to my guns about Tim Tebow – he has heart but no NFL QB skills. When will the fans start yelling, “Quinn, Quinn”? However, football still has the power to make me plant myself on the couch for three hours.

Victoria’s Secret Commercials. I’m embarrassed to admit this one. Okay, I’m not. I can fast forward through a TV show at top forwarding speed, read on my iPad at the same time while I listen to music and talk to my wife, and still catch the quick flicker of a VS commercial.

And every time I stop, rewind and play it, my wife shakes her head and wonders why she ever decided to go out on a date with complete idiot like me.

I’m not sure, but I love her so much I’m building her a time machine.

Tricky commercials. One of the first lessons I taught my daughter was how commercials don’t tell the truth and deceive us. Beer ads don’t use exotic locales like AA meeting halls and skid row. Banks don’t loan people money because they’re nice. And only one in 100,000 people is going to learn the Chinese alphabet on an iPad (an app used once by my daughter who had to have it). And much to my disappointment no bird ever flew out of a box of Coco Puffs.

But I watch certain commercials like one might watch a magician perform a trick – how did he do that? I know, or at least I think I do.

Would you think less of me if I told you I've seen this movie over 10 times - or parts of it 10 times?

Movies I’ve seen five times or more. If I’m up late on a weekend and a movie I like comes on, one I can recite the dialogue to, I can’t stop watching it. Even with the power of a DVR at my fingertips, I stay up way too late and suffer the next day.

Examples include: Predator, Road House, Ronin, Heat, Bullitt, Butch Cassidy and the Sundance Kid, and a myriad of others. I can’t explain it but if I record the movie and watch it the next day it’s like eating a day-old bagel my daughter forgot to seal in a bag – stale.