She was two feet away from him, back to back – close enough to inhale his rock-star pheromones and hear his “Running on Empty” voice talking to the people behind us in line.

The moment she’d waited for her entire life was here.

The man, the artist, standing right there, within arm’s reach, as we waited to see him and other musicians perform a benefit concert at the Theatricum Botanicum in Topanga Canyon.

What cruel twist of fate brought this choice to her now, after all of these years of waiting, hoping?

She needed to decide: say nothing, or seize the opportunity to meet the man of her teenage dreams after years of longing and listening to his music, first on scratchy records, then CDs that could easily be played over and over again until the laser in the CD player burned out. And of course there were the dreamy posters of Jackson with his cool rock-star hair and model good looks.

Oh, Jackson, if we ever meet, it will be love at first sight for the two of us.

[click to enlarge} I must say that Jackson Browne seemed like a very cool guy. He hung out in the line with some friends before the show, and sat on stage the entire concert and watched the other artists. The joke all week prior to the concert was telling my daughter that we might have to hold her mother back from rushing the stage. But there we were four rows back and my wife stayed put. BTW, though JB played only one song, the concert and other artists were amazing.

All she had to do was turn around, look him in the eyes, and say, “I’ve dreamed about you for years. I’m yours, kiss me now, I’ll leave my husband and we’ll run away and live off of your money until the end, which, because you’re older, will probably come sooner.”

But she didn’t. She chose me over of an aging multimillionaire rock star. Yes, me, a genetically defective mutant who spends several weeks each year in the hospital.

And all I have to say is, WHAT WERE YOU THINKING, HONEY? That was your chance and you blew it.

Poor Jackson. He’ll never know the love and goodness he missed out on.

As the event planner for our family, I scheduled quite the weekend of fun. I made sure I did what I wanted to do and brought my wife – the mother of our child – and said child along for the ride.

Yes, I am the world’s least thoughtful husband. I stopped just short of buying myself a gift.

At one point, my daughter thought it hilarious, in her 9-year-old way, to state all of the work my wife does and compare it to how little I do. This wasn’t on my list of events for the weekend. But that didn’t stop her from delivering this bonus gift to her mom, at my expense. Ouch.

Then my wife joined my flogging and asked me if I ever did laundry before we met. I must have. But to tell the truth, I don’t remember how I did it.

I don’t think I can operate our current washing machine. I’d have to stare at it and hope my Jedi powers would jump start it. But I do remember putting quarters in the machines I once used. Quarters in, wash. Quarters in, dry. Walk away without a date.

I can say this: I hated washing clothes.

Anyway, that was a long time ago. I’m sure I’ll get another beating on Father’s Day. But, the male lion did defend himself with the building of our bathroom, a deck, the furnishing of the house, and the planning of this weekend, which without me would have left the two ladies in my life sitting around playing Uno and watching HGTV – all in the house that I built with my bare hands while wearing a manly tool belt and oozing a certain man musk that attracted every feral cat in the neighborhood.

I saved my wife and daughter from the mundane and episodes of “House Hunters.” Growl. Now let me take my 16-hour nap while you hunt for my dinner. 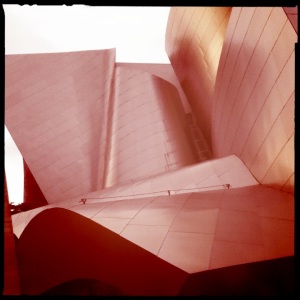 Every angle of this building looks cool

The fun started Saturday with “The Songs of Patsy Cline” at the Walt Disney Concert Hall. We’re not big fans of Patsy Cline songs, but we were of the talent singing the songs. And, having never been to the amazing hall, an attraction in itself,  I decided it would be a fun thing to do on the evening prior to Mother’s Day.

Five jammed lanes of L.A. traffic killed our plans to eat dinner in a historic downtown firehouse, now transformed into a restaurant. So, we improvised and ate chicken curry, peanut butter and jelly, and saltwater taffy at the concert hall cafe.

Oh, and what a building it is. It lived up to every photo I’ve seen of it. And the inside – equally jaw-dropping.

The concert delivered voices best appreciated in person. Inara George of Bird and the Bee fame and The Living Sisters hosted and brought tears to my eyes with their harmonies. Guest stars included John C. Reilly, the actor, who is an excellent performer, John Doe of X fame, who my wife couldn’t stop talking about after the concert, as if he would be a better husband than I, because as we all know, rock stars make great husbands, and Zooey Deschanel, who my daughter knew of from Elf, the movie. 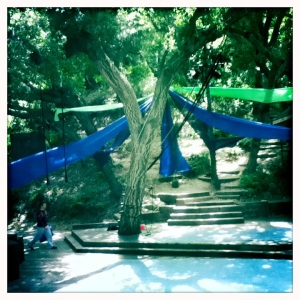 Sunday included a trip to our favorite local secret hideout of talent – Theatricum Botanicum. I used the term “secret” because this outdoor theater is one of the best values in L.A., and showcases incredible performers.

We watched Momentum Place presented by Take Note! and Lexi Pearl. The show  mixed acrobatics with comedy and the reading of the written word. It was fantastic.

The highlight for us was a comedian/juggler/contortionist named Scot Nery. Here’s his web site: http://jugglegood.com/#home  If you ever get a chance to see him, do it. He put on one of the funniest “clean” shows I’ve ever watched.

I’m grateful to have weekends like this one, as we made the most of the two days we had. I only wish they weren’t so fleeting.

I can’t wait to see what my wife plans for Father’s Day. Probably a mani-pedi, or something delicious like watching reruns of Sex and the City, or talking about our feelings.

Payback can be cruel.