Fox is a trickster

Fox jumped out of my computer today and landed on my desk, sending papers and books everywhere. Then he sat and stared at me with his fox eyes, making it hard to concentrate on my work. Finally he spoke and told me he had a gift, but I didn’t see a package.

Everything went black for a second. Then I had a vision:

My tweeps and I were in the middle of the Pacific Ocean on a fast-moving yacht.

Dragging in the water behind the boat was what looked to be a giant green Michelin Man, but it was really cystic fibrosis. Sharks were tearing pieces off its body as it bounced up and down on the water. It was still alive, but clearly suffering, and had seen better days before it had become a toy for the sharks.

@CysticGal walked up to me holding a paint brush. “I’m painting the yacht purple,” she said.

“What happened to pink?” I asked. 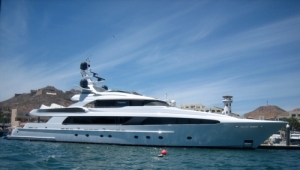 “Purple is the new pink, dummy,” she said.

She looked fantastic in a sharp-looking Calvin Klein boating outfit and Jimmy Choo deck shoes. She walked away and splattered purple paint all over the deck. Magically, each splotch transformed into a perfectly shaped flower.

“Hey, Ronnie,” I said as @runsickboyrun and Mandi jogged past me. I did a double-take because Mandi was having a hard time keeping up with Ronnie, who looked supercharged. Their video crew couldn’t keep up and tumbled over the side of boat.

A camera appeared in my face with @onlyz peering over the top. “Cheers, mate. Glad you finally woke up. Thought you was a right bang pludge wonk there.” I had no idea what he said, having left my British English/Real English dictionary at home.

He snapped another three photos, as @CFFatboy, dressed in his tattered college alumni shirt, stuck two fingers behind my bagged head, rabbit style. He had a protein shake in the other hand, but looked like he’d exceeded his weight goal by a few dozen pounds.

“You still need to drink that stuff?” I asked.

“Hard habit to break,” he replied. “Benching a ton these days. Loving that.”

Looked like he weighed a ton judging by his torn clothes, kind of like the Hulk – if the Hulk had a Florida tan and wasn’t green.

I went to the upper deck, passing @rlcarroll working on his iPad, drinking an Old Milwaukee. “You were right, Unknown, this beer is good and my iPad does rock. Who’s Laughing Out Loud now, B-atch,” RL boasted. I thought about kicking the iPad out of his hands into the water, but I saw his sunburn and decided silence is golden.

Tasty goodness in a bottle

A woman with her back to me was loading a large surface-to-air missile launcher. I’d never met her, but I knew who she was.

“Finally, we meet” she said. “You ever going to take that bag off your head?”

“When I can afford plastic surgery,” I replied.

She smiled. I looked at her eyes, happy to finally meet her, and knew today was important to her.  “Will that be enough?”

“Oh, my toy?” she asked, holding up the imposing weapon. “I’m ending this madness now.”

With that she walked down to the back of the boat, passing @seanset, @cfstinabug, @CF_gurl, @Nanosmakemepuke and my other Twitter pals, who were all dressed in formal wear. @CysticGal had changed outfits, too, Vera Wang spring collection, and had some rock star I couldn’t place next to her. She was happy because she set the drink theme as “M,” as she loves alliteration. Everyone drank mohitos, martinis and margaritas.

My newly met friend and her large weapon stood at the back of the boat, CF dragging and bouncing in the water, eyeballing us, fight and anger still in its eyes. But it knew what was about to happen. The hunt was over.

She raised the large MRP weapon of destruction to her shoulder and sighted it squarely at the monster, whispering something to herself, adjusting to the motion of the sea and the monster. Up and down the boat rode the waves until a large crack broke the silence, a trail of flame and smoke followed the shell to its target.

Pieces of CF flew everywhere, landing in the water. @onlyz detached the dangling rope. “Well, that happened,” he said, wiping his wet hands on my bag, making it stick to my head.

We left CF behind, the sharks cleaning up the bloody mess until there was nothing left.

Everyone raised their glasses, toasted, sipped, and was quiet. Warriors lost filled our hearts and minds, as we knew it was time to head to port.

The vision ended there and I was left to wonder when Fox would return and send me back to the yacht. The best was yet to come.

14 thoughts on “Fox Ventures Out for a Day Trip”