Thousands sandwiched together . . .  costumes everywhere  . . . unusual odors . . . loud, dull hum of crowd . . . more shuffling than walking . . . mooooooo, says the cow . . . paper mache swords, knives, guns, sticks, and axes . . . short skirts and garter belts – lots of garter belts . . . a baker’s dozen of Spiderman costumes . . . Zelda and lots of her friends with elf ears . . . characters in action poses having their pictures taken . . . I’m in germ hell . . . some wear surgical masks, smart, should have worn my construction mask . . . men without shirts, men in maid costumes, men in dresses . . . woman wearing Lulumon yoga pants who didn’t hear about the recall, or chose to ignore  it . . . the old X-Men posing together . . . “Must be 18 with ID to enter” sign . . .  the Village People wearing costumes? ironic? . . . lots of wigs, lace and leather . . . more Marvel superheroes (Are they at the right convention?) . . . food truck heaven outside, all with long lines . . . fast-food loving male and female superheroes with muffin tops who should have worn Spanx under their spandex . . . Tip: Never wear wings to a crowded event if you don’t want to walk sideways all day – bad costume choice . . . hundreds of cartoon characters I’ve never seen before . . . more soft core porn . . . drawings of females with large breasts, tiny waists and big eyes (Japanese Barbie dolls?) . . . more weapons with red plastic ties to prove they were inspected upon entry and cannot shoot real bullets, rays, sunbeams or potatoes . . . creepy guy not attending expo talking to two young girls at lunch, started coming toward my daughter and her friend until I caught his eyes and he turned around . . . piles and racks of anime stuffed animals . . . skinny man in Wonder Woman costume looks out-of-place – how is that possible here? . . . attractive woman dressed as Electra with two spandex femme fatales, heads down, race quickly through the crowd – to avoid men asking to take their picture? . . . a lot of superheroes need smartphones to communicate . . . I should have worn a paper bag on my head, or at the very least a surgical mask, which makes me tell my daughter that I’m going as a surgeon next year . . . if this is what the expo looks like at 3 in the afternoon, what will it look like later tonight?

Whew, that was a mindful. Faulkner is turning over in his grave right now.

Little did I know what was coming my way when my daughter asked me to take her to Anime Expo 2013 in downtown Los Angeles.

And though the experience may have started with a shock to the system, surrounded by a convention hall full of costumed characters, it bloomed into a cool, hip experience at the second happiest place on Earth. We soon discovered, after we got our credentials, that we were surrounded by people being themselves and having a great time. Not a bad place to be on a Friday afternoon in Los Angeles.

Here are my three favorite moments from the day:

Here are some photos from our adventure (click to enlarge). We’re already planning our costumes for next year’s event. I may go as a surgeon or Plywood Man, with a costume made entirely from wood. It could happen.

Cactus Man? Odd cucumber dude? Clearly, I’m not up to date on the latest characters.

I’m thinking that after three or four Cokes and a large burrito from a food truck, this gentleman may regret his costume choice. 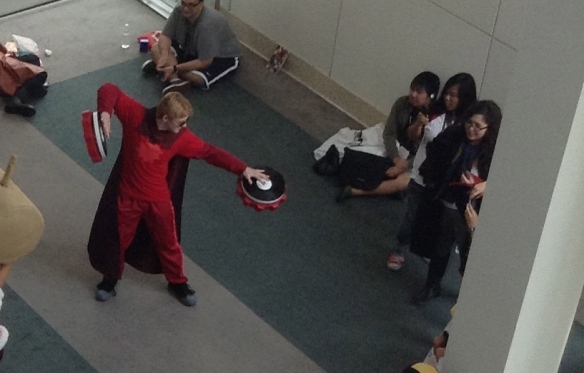 This was one of my favorite superheroes. He’s spinning records – DJ Man? This could be the secret identity of my friend @onlyz.

So, I appreciated this one, but my daughter didn’t. It shows what you can do with an old pair of shower shoes, black stockings and a dress. However, as my wife pointed out, even Death needs a convention goodie bag.

“What a blockhead,” I said as I spotted this guy before my daughter did. She just looked at me the way 11-year-olds do. 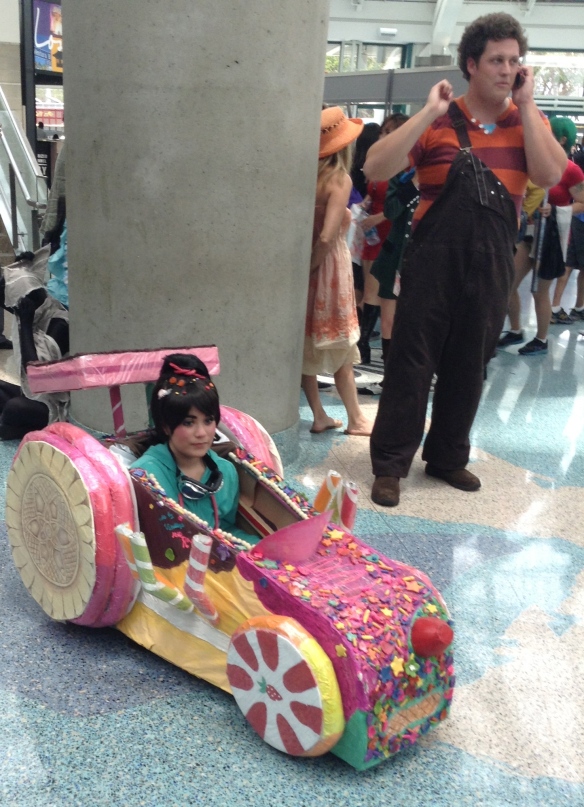 There was a pause in the action as Wreck It Ralph took a phone call.

There’s something I really like about this photo. All of a sudden the sea of humanity parted and this couple was standing there. I can only guess what they were thinking and that’s why I like it so much.

This was my daughter’s favorite photograph, which impressed me when she told me why: it looks like an every-day photo of someone getting lunch in LA, but not. Hard to argue with that.

We think the guy on the left wormed his way into the photo. He seems out of place, if that’s possible. 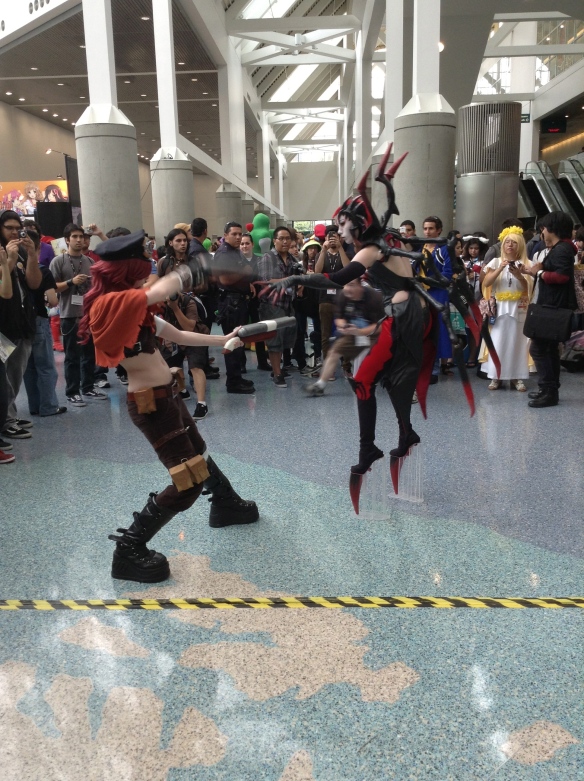 Here’s what an action pose looks like with photographers taking pictures. If I had to bet on one character winning this fight, I wouldn’t bet on the woman in 14-inch plexiglass high heels. 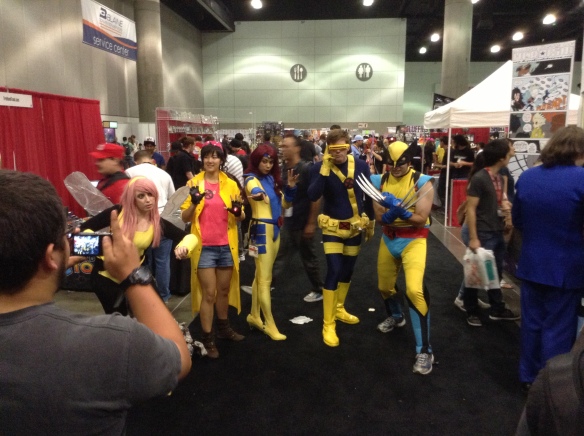 Action pose by the X-Men. What you can’t see here is that Wolverine is wearing a Wolverine backpack.

Have wings and a wheelie travel bag and you’re set for adventure. 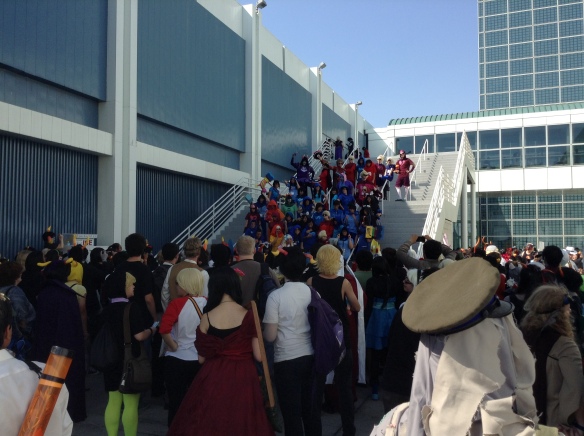 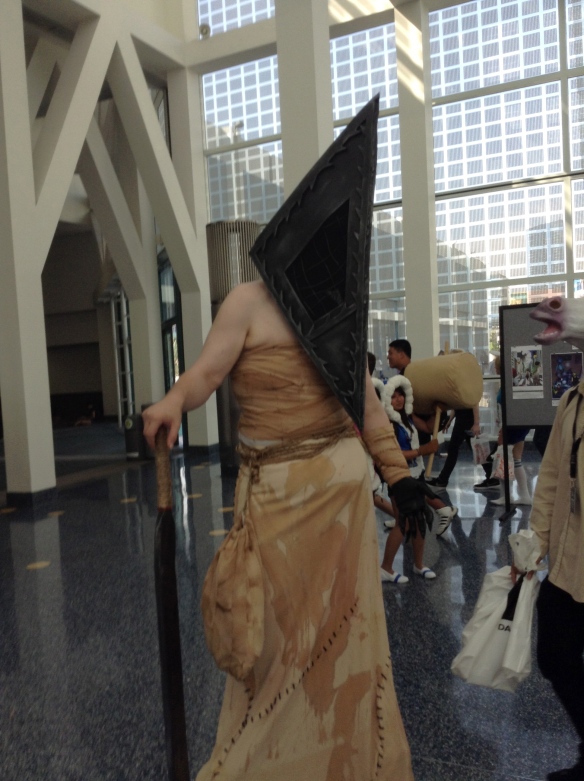 As we were leaving, we saw this beauty, which made me think that leaving before the sun went down was a good idea.