I have a confession: I feel hopeless and powerless when it comes to what’s going on in this country.

I probably read too much, or read too many stories of Americans who have fallen on hard times while the rich enjoy their lowest tax rates in 50 years. There’s a whole lot of wealth resting in the richest Americans’ hands. Well, not in their hands, actually, more like their brokerage accounts where it does little to grow this country. 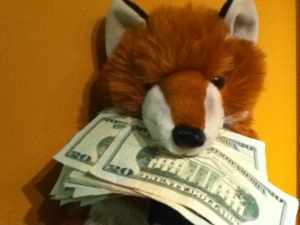 Fox panicked when he read this post and rounded up all his cash, lest it be taken away by the government. Then he started screaming "FU, you socialist bastard." Now he's locked up in his cage and I'm cleaning the wounds on my arms. Never keep a fox as a pet. It will come back to bite you one day.

And then there’s our Congress who protects the rich like they’re endangered baby seals and heaven forbid someone club their bank account to shake loose a few dollars. The rich and large businesses own the congress and fund their careers so it shouldn’t be a surprise who they answer to. And to top it off, they serve up a load of crap about “Job Creators” being taxed creating fewer jobs. Here’s a nice op-ed on that:

I wish I had a new spin on all of this other than to say I once believed in Gordon Gekko‘s mantra: Greed Is Good. But I don’t anymore.

Greed is good for the few, but not the many. We need Captain Kirk to beam down and put a little hurt on the people in our government who protect Paris Hilton’s savings account over the welfare and well-being of middle class families hit hard by the recession (the one that never went away for a large portion of the population).

Years ago, I gave up watching the local news because I couldn’t take the bad news it served up each night. I may have to give up reading on the Internet. The “machine” built to convince people to vote against their own interests and protect the interests on the “machine” is just too great to fight. I don’t have the energy to argue anymore.

I know some people will disagree with me. That’s fine. I do have one question: If the rich, aka job creators, are enjoying historically low tax rates, why aren’t we overwhelmed with jobs in this country and why isn’t the economy booming?

I know it also has to do with companies outsourcing jobs and it’s a complicated issue, but that’s what I wonder everyday when I read a story of a middle-class couple with two kids, who lost their jobs, then their house, then their car and who now live in a homeless shelter. Why aren’t the job creators creating jobs with the money they’re saving in taxes?

Could the rich be lying to us about taxing the rich?