I should know better. 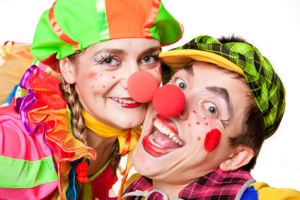 My wife and I like to have a “clown night” once a month. It makes us laugh and keeps the relationship fresh. (This photo may or may not make more sense later in the post.) © pirotehnik – Fotolia.com

Fresh off the letter I wrote to my daughter the other day, and thinking about the person she became this year, I decided to surprise her with American Idol tour tickets. We hadn’t planned to go this year, but then I thought, what the heck, she deserves it (and how many concerts can you take a 10-year-old to these days?). So, I bought tickets. Three bills, including parking and ticket insurance.

When my daughter came home from school, I let her know we had a surprise for her and would reveal it during dinner. She asked for two guesses. Clothing? No. My little pony? No.

Off she went to guitar and singing lessons where she told both instructors about the coming surprise of surprises. I don’t think I made it out to be that big. But once again I underestimated the mind of a 10-year-old and the things she can dream up in a section of her brain called, “Cave of Super Cool Surprises.” Evidently it’s quite a spectacular place. No adults allowed.

“All she talked about in the car was the surprise,” my wife said.

Still optimistic, delusional, and blind, I sat down at dinner and started telling my only daughter how we thought she really grew this year. My wife added some nice words and we both realized none of it was sinking in. We were the adults in the Charlie Brown holiday special, “wa wa wa, wa, wa wa,” speaking unintelligible words to a child.

I handed her the piece of paper with the concert information on it.

Then the parenting gods sent in The Clown. And he delivered a large pie to my face. Smash. Cream filling up my nose. “You should have seen that coming,” the Gods said.

My favorite pie to be hit in the face with. © xmasbaby – Fotolia.com

Disappointment on my daughter’s face. I never learn.

She was polite, but we could tell she had something else in mind.

“What were you hoping for?” we asked.

After 30 seconds of not wanting to say it: “an iPhone.”

Send in another clown. Smack, brick to the face. Is that my blood dripping in my pasta?

An iPhone? Hello, left field, are you kidding me with that one?

And then we had the painful “gee, we sound like parents” conversation about how she didn’t need an iPhone.

“Who would you call?” Silence. “You can use your mother’s iPhone.” Silence. Clearly, she’s a government agent and needs her privacy. Can the government not afford the cost of iPhones for their agents?

I ate my dinner and we talked about the upcoming concert. Once again, I felt like a chump. And my wife salted the wound by reminding me of the bike at Christmas (see post in Dec 2011) and the pain of that unwanted gift.

Lesson learned: Never surprise a child with anything other than the exact gift they want. (In other words, don’t surprise them.) Otherwise, the parenting gods will serve up a harsh lesson delivered by an imaginary clown.

13 thoughts on “The parenting gods deliver another lesson to moi”