[I’ve often said the best thing about my blog is what my friends and readers say in the comments section. Tonight I’m putting my money where my mouth is and sharing a comment a new friend from Australia wrote in response to my post, \”I should be deported\”

For years now, I’ve struggled with my lack of success in the USA. I live in Los Angeles surrounded by million-dollar-plus homes and 100K automobiles, all daily reminders of a wasted youth and the catch up I’ve had to play. And it has rained on my happiness, as it has for many Americans since the mid-1950s: consumerism has gone up, happiness has gone down (Story of Stuff). This is no surprise as we’re bombarded daily by advertising for the newest latest product with the message: you suck if you don’t own this.

My sincere thanks to Karyn for the comment below, which made me feel better and hopeful there is a place I might feel satisfied not keeping up with my neighbors, and where I don’t have to be a 1-percenter to be happy. It’s a magical place called Australia. I’ll let her tell you about it. Oh, btw, I added the pictures and captions myself.]

In response to “I should be deported.”

As well written and provocative as this was – for me at least – you were preaching to the converted!

I wonder how many people end up taking trips to Austria because they can't spell Australia?

I spent my formative years in Australia. In my mid twenties, I moved to the UK for a year, and then to the USA for 10 years where I got married and had our son. I’m now back in Australia, (as you know). But I feel if nothing else, the travel has given me enough credibility to comment with some element of knowledge on this subject.

America, for all the positive things it has going for it (and as an outsider, let me say that I truly believe it does), what is so sad to me, is that the ‘middle class’ (or upper middle class) will always – as you so eloquently described – feel like failures. For me, what I noticed was a prevalent sense that everyone is trying to ‘keep up with the Joneses’ (whoever they are).

People bought new cars every few years (even though it came with a large and often stressful car payment), because driving an old car told a story – a story that no one wants to be associated with –  “I must be poor and thus unsuccessful!”

They bought bigger homes, or renovated. They vacationed in luxury resorts, wore designer clothes (as did their kids), paid for nails and pedicures every two weeks and hair coloring every month. They purchased the latest electronics, the furniture and decor in the homes are truly a sight to behold – it all coordinated perfectly – and looked like an (Australian) ‘Home Beautiful’ magazine cover! There was a LOT of pressure to be perceived as someone successful.

I understand that this probably isn’t the case everywhere, but in the circles we traveled it was universally the case. Yet, when you came to know someone on an intimate level – more often than not – they were unhappy. They were in debt, feeling overwhelmed, like failures, tired of working their fingers to the bone just to stay afloat, and the “stuff” wasn’t providing them the life they hoped it would, and it wasn’t making them happy either. 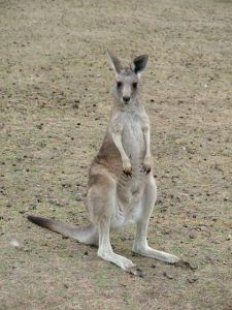 I'm not sure if you can eat these or not. Or, if they are poisonous and deadly and can chase you down and eat you? I think I read this in an Australian tourism booklet. I may be wrong. Creative Commons: Mollycat

Here in Aus, and in the UK where I was living (though my time there was brief), people often drive 10 and 15-year-old cars – people with well-paying jobs – and, (gasp!) money in the bank! If the car works, is in good condition, and isn’t causing problems, they don’t replace it. “Why would you?” they ask. “Why would you take on car payment when you own a car outright, that works perfectly and is comfortable for all who need it?”

Homes are not as large, decor is not as elaborate and doesn’t coordinate as well… ‘kids clothes do the same job if they are purchased at Target’ I hear the mothers reason. My son attends the best private school in our area – few cars are new, even fewer would be considered “luxury”. Most kids don’t have the latest iPod and iPad. (I hear parents tell them; “Get a job and save up for one yourself!”)

The one difference I have noticed where we Aussies DO spend more, is on vacations. Australia offers all full-time workers 4 weeks paid vacation a year – standard. If you work for a government or large corporation you get an EXTRA 17.5% “loading” on top of your regular salary amount when you take holidays…I have no idea why, but its an awesome rule! (My husband has deemed it the  “vacation-spending-money-fund.” He is in awe of this lottery-like law!)

We know how to relax and do it well, and apparently, often. Most middle class families take overseas vacations every few years. Almost all go away on vacation for at least a few weeks domestically, and do so without financial strain. Granted things cost more here, but salaries are markedly higher, which helps to compensate. We do cut corners to help ourselves along though – on the smaller stuff.

Its rare people pay for cable TV (we have about 12 free channels that include most popular US shows including those seen on cable like Weeds or Californication – we’re liberal like that!). Men mow their own yards as a general rule, and clean their own pools. Women iron the clothes and don’t often use the dry cleaner, and they clean their own homes. (Oh how I miss my American house cleaner!!) But, given the homes are smaller,  the cleaning is not a large or laborious job.

There isn’t a Starbucks on every corner, so we’re not spending on daily coffee – we make it at home. (Most Australian houses have commercial-style coffee machines in the kitchen, something that has changed since I lived here a decade ago, they love their coffee!) When we do go out, cafes are for coffee AND cake (if you’re going out, dammit we may as well celebrate!) Beaches, rainforests, hiking, lakes are all free. There are a lot of community-type places that are family-friendly and free, that I didn’t really see in the US (though that may have been representative of where I lived, not the country as a whole).

Every Australian has one of these in their pool. It's why the country down under has a great Olympic swimming team. Creative Commons: Stormy Dog

Please don’t misunderstand me. I am a lover of the USA, and I myself miss the positive influences the USA ingrained in me, and am grateful for the many opportunities the country provided me. However, being ‘home’ now for just on a year,  I realize that without our car payment (we bought our cars for cash when we got here), and all those extras, we are a lot happier. We don’t check the bank account as often, asking ourselves “where did all the money go?” And we don’t bicker over how someone could possibly spend almost $200 a month on Starbucks. (Yes, I never said that I didn’t jump right on the bandwagon once I was there, did I? Its hard not too – it’s the culture of the place – and after 10 years you integrate with the culture, whether you realize it or not!)

Here, we don’t care about the Joneses (I still haven’t figured out who they are) – and our friends here don’t either. People are judged much more on WHO they are, rather than WHAT they are. If you’re a rich asshole, no one will kiss your butt, I promise! If you are a genuinely nice, kind and respectful person, we don’t care what you drive or where you live (as long as you have beer).

For me, this move was a good choice. I am happy to raise my son with these stands and ethics, I hope that someday the corruption of big business and politics – and the hopelessness of middle America that seems so rife – ends, and that a more attainable lifestyle becomes the norm. Wouldn’t it be wonderful if people could universally see how “stuff” and “impressions” are just that – nothing that will matter when you are 90 years old, and have only your memories and relationships for company.

As for the politicians and the banks…oh don’t get me started on those bailouts! Doesn’t it seem so ass-backwards when a hard-working family can lose their home over a layoff (that they have no control over), but a law-breaking CEO can get a bonus and his bank bailed out, for their failures and poor decision-making? 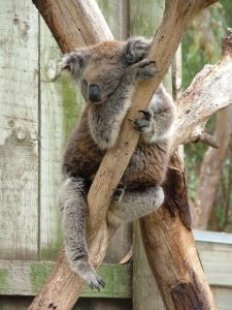 Now this is the animal most Australians fear the most. Has six-inch fangs and at night it hunts cats and dogs and eats them whole. Creative Commons: Mollycat

As for all the killer animals here, we’ve been here a year, live on the coast in the country, and haven’t seen anything that will kill you yet! As grandpa used to say all those years ago “he’s more scared of you than you are of him” – they would prefer to be away from you, just as you would prefer to be away from them. Come on over for a visit, Australia will welcome you, and the water is fine!

10 thoughts on “My new Australian friend gives me the night off: Guest post by Karyn Pyle”