I didn’t spend summer in the hospital. [Fox applauds, then passes out.]

I feel like I won the lottery by not going in, though the pattern for me has long been one without summer hospital stays. With falling leaves, colds and other viruses on the way, you can bet that I’ll soon be returning to hell.

Ebony and Ivory, living in perfect harmony on the beach

And if you’re a betting man or woman, I’d bet on the blood thanks to the blood thinning shots I’m stabbing into my McGriddle-fattened six-pack twice a day. And I’ve just tempted fate by mentioning it on the blog, which means I’ll probably be in the hospital coughing up blood within the next two or three days.

I did spend June working on what the Donald would call a “super-big, important, super-large” project at work. It was a success and once again I proved it’s better to be lucky than good, and assembling a talented team always makes one look better than they truly are. Go Team Unknown.

We did spend the summer with a new puppy – a goofy, mischievous, shower-squeegee stealing, whining, scared of her own shadow, mystery of a black lab that I wanted to give away, but was outvoted by my wife and daughter, who are both attached to the black shadow-thief. (That’s all I can write about the dog, otherwise my friend @onlyz tunes out at this point and starts to read the back of the vegan muffin package.)

I didn’t spend this summer blogging or watching TV, but I did spend it reading. I read over 8,000 pages and enjoyed every minute, staying up late and making the most of when time takes its mandated-by-law break.

I did spend the hot months milking every bit of fun I could. I filled every weekend with an activity and dragged my wife and daughter to all kinds of places. From the American Idol concert, to the beach, the circus, a dog agility trial and canyon roads we’d never driven. We didn’t take a summer trip this year thanks to the blood-thinner shots, but we still had a great time and spoiled ourselves by eating dinner at restaurants more often. 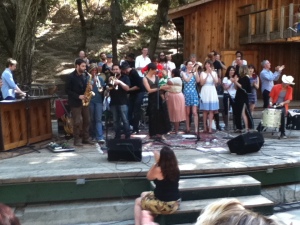 The end of a great concert at Theatricum in Topanga. Check out a play here if you're in Los Angeles.

Monday, Labor Day, we ended the “holiday to holiday” summer with the annual benefit concert at Theatricum in Topanga. What an amazing afternoon filled with talented singers singing Burt Bacharach songs. A great way to finish my favorite season of the year watching some of Los Angeles’s most talented musicians, like Inara George and Sara Melson, play music for two hours.

So, I’m happy with the job I did having fun this summer. I cannot guarantee I’ll see another one. I hope I do, but it’s not written in stone that I will.

Now it’s time to focus on autumn and the Denver Broncos winning and me staying out of hell and not catching colds or the flu or coughing up blood. I’m optimistic, but know sometimes there is nothing I can do but ride out ill-timed surprises.

Here’s to a healthy fall and winter to all.