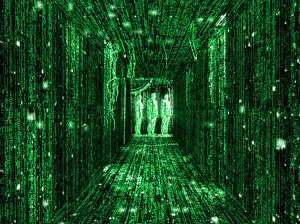 I love “The Martix.”  The first film, not the sequels.  I remember looking over at my wife when the movie ended and we didn’t say a word; but our eyes said it all.  Holy s**t!

Yesterday, a CF blogger I just met online posted her PFT results from 1982 to 2006.  And I had a Matrix moment.

At the end of “The Matrix,” Neo’s sees the world in green code (picture to the right).  When I looked at the PFTs, I saw more than just numbers – I saw the code behind her life with CF.

I saw the story of a warrior – a mother – who has drawn a line in the sand she won’t let CF cross.  A woman battling over the decades to maintain her lung function, fighting for every percentage point and a life with her son.

There were 92 entries on the list and it’s not complete. Over 92 times she sat with a PFT tech or nurse and blew into a mouthpiece until her face turned red and her lungs were drained of air.

And, if you know PFTs, you know that you usually don’t blow once.  You blow three times on average, depending on your clinic and how long ago it was. (How many computer candles have you blown out in your lifetime?)

I had never thought of PFTs in this way before – that they tell our CF stories in code.  They reveal the low points in our lives when we wondered what we had done to lose so much lung function. (How did it happen? What did I do wrong?) They showcase our victories when new drugs were introduced or we exercised more or we found a supplement or treatment that helped us outfox the disease.

I wish I had a complete running record of my PFTs.  I know what they would show and it’s painful. It would show that I was hotheaded and made more mistakes than I did correct decisions.  That code would rip open old wounds.

I find it more comforting and motivating to look at others’ code and root them on.

What will our PFTs look like when a cure is found?  Like Neo at movie’s end, that will be our victory for years of hard fought battle. The code will no longer matter and we can go on with our lives.

16 thoughts on ““The Matrix” and Pulmonary Function Test (PFT) results”