The day after I left the hospital, I woke up from a dead sleep with my nose streaming blood. It bled for over three hours. The first two hours, a steady flow, were the scariest, sending me to the ER at 3:30 in the morning, wife and daughter with iPad in tow. And once again I know why I could never kill anyone. It’s the blood. Not that I’m shy about seeing it, but it gets everywhere. And unless you’re Dexter and wrap up your victim in plastic, you’re going to get caught because of it. We’re still finding brown spots in our house days later. 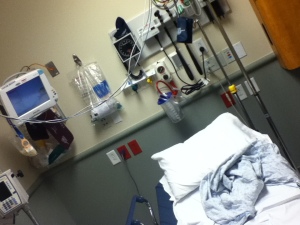 As I had my hands full during this ER stay and didn’t think to snap a photo, I used a photo from my last visit, which wasn’t that long ago. Argh.

At the ER, the nice, but “unseasoned” doctor first sprayed Afrin in my nose, which is a great trick to know when you need to stop a bleed. But, and here is another important thing to know when you have a bloody nose, if your blood pressure goes up because you’re anxious, the bleeding may continue. And that’s what happened to me, causing an “Afrin fail,” though we didn’t understand the blood pressure connection at that point.

Move on to Plan B and bring on the tampon nose-balloons. Insertion and inflation complete, I bled around them, over them, under them. Until I didn’t. Then the blood built up and drained down the back of my throat. Then they leaked again. Second fail. What’s Plan C?

I had a moment where I wondered if I should invite my wife and daughter back to the room filled with red and white towels because the doctor sounded like he was out of tricks and I had this strange feeling that after all of these years I might be killed by a bloody nose. Irony?

The bleeding went on until I did two things. I made the connection between anxiety and what the volume of blood coming out of my nose and asked for something to relax me. I received an Ativan tablet, which surprised me as they had an IV in me and could have express-trained the dose. I also called my sinus doctor since I thought I needed to take control and do everything I could to fix the situation. To my surprise he called me back, instructing the ER doctor to get my blood pressure down (as in get me to relax), tilt my head forward, and place an ice pack on my nose and forehead.

Hello to more Ativan and a blue bag filled with ice. 30 minutes or so later my nose was down to an annoying faucet-like drip and I was slurring my words. And after three hours at the ER, I let my wife drive me home.

Nine hours after the bloody nose started, I arrived at the sinus doctor. He deflated and removed the balloons, mixed up some glue-like substance that reminded me of the time I epoxied rebar into cement, coated my sinuses with it, and the bleeding stopped. Relief at last.

He sent me home with a prescription for Ativan and the following advice should my nose start bleeding again: shove Afrin-soaked cotton balls up my nose, lean my head forward, squeeze my nostrils, place an icepack on my nose and forehead, and find a quiet place to remain calm. And kiss my ass goodbye.

Okay, not the last part, but you know that’s what I’ll be thinking if it happens again.

9 thoughts on “Nose Bleed from Hell”