I’m back in heaving ocean waters again. A sea full of medical tests and ailments. And it’s going to be awhile before I can escape its grasp and swim to shore.

It started with the blood clot in my neck and the twice-a-day “shots  from hell” to the gut. Now I have two hematomas on my fat-covered six-pack – large bruises with nodules of what I guess is hardening blood in the middle. Kind of like chocolate candies with almond centers, not that I’ll ever eat those again now.

There are a million rocks under that whipped cream

Then last week on a vacation day, the ocean attacked me by throwing a large stone at my foot. A trail of cuts runs up my right foot to a large bruise near my ankle bone.

I was standing in a field of rocks with my daughter searching for cool looking specimens to take home when a foamy wave shot up the beach, rolled a nice big rock and beaned my foot. It hurt, but I was fine until I went bowling Sunday.

Who’s bright idea was that? Oh, yeah, mine.

So, we went, Sunday, bowling. And on the second ball I rolled, I pulled a muscle in my ass and back. Embarrassment does come with an injury like that, but I can brag that I played through the pain and bowled three games without being able to bend over to roll the ball. I just sort of had to throw it down the alley to manage the pain. (Grunt, toss, thud, sound of pins falling.) 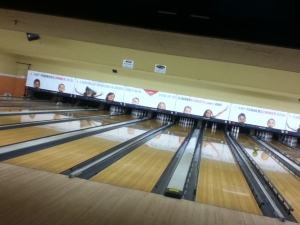 Clearly, I was not in bowling shape

But we still had fun, with my daughter providing the highlight by leaning over the fan on the ball return and putting the gate down as my ball was heading down the lane. CLANK. Then, as we were figuring out what black magic prevented me from picking up the spare, my ball rolled all the way back and I picked it up as if nothing happened. Good times.

Until I took my shoe off.

Something about the bowling shoe irritated the bruise and caused a golf ball sized hematoma on my ankle, confirmed by the ortho Dr. yesterday.

By bedtime, my foot looks like it belongs to someone you’d see on Jerry Springer who hasn’t left the house for five years because he enjoyed home delivery of ten large Domino’s pizzas each day and crushed his scale north of a 1,000 lbs.

But that wasn’t the best part of the appointment with the ortho. I received a bonus gift during my visit, which is so often the case with visits to the doctor. I choose door 3, but they surprised me with door 2. He told me there is calcification in the artery? Wasn’t clear on that, but he said he normally only sees it in much older patients and I need to see my heart doctor about it.

Now I have to get a stress echo or cardiac cath, the latter makes me sweat and want to throw up. Not big on caths of any kind, especially on a blood thinner. 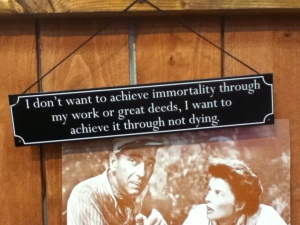 Caption says it all

Oh, and I have the tooth that needs to be pulled asap because the gum is bubbling again, but which I keep putting off because I need to get an oral surgeon to do it thanks to the blood thinner.

Despite all of this, I’m doing my best to power through it, have the best summer possible, and keep swimming with the pain and riptide until the tide turns and I can swim to shore. This is about endurance and mental toughness right now – both of which I often lack.

Or I’ve reached the point in the movie where the lead character has lost it and is waving his gun at the monster in the fog and screaming, “come on, if you’re going to kill me, do it. DO IT. What are you waiting for? Come and get me.”

The next sound you hear will be me firing my remaining shots into the fog.

2 thoughts on “Caught in the medical riptide”